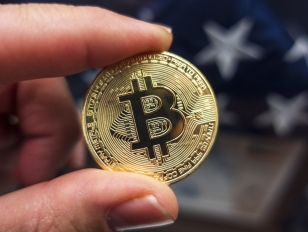 In 2009, on the heels of the Great Recession, bitcoin entered the financial landscape, touted as a decentralized digital technology that rivaled gold. It had a value that was scarce, durable, divisible, transactable, portable, and fungible.

Today, thousands of other cryptocurrencies and digital products have joined bitcoin as a new blockchain technology. Many financial experts expect them to dwarf the technological revolution of the Internet ushered in during the late 1990s.

Despite its growing popularity and increased use, cryptocurrency is still a mystery to many people. Curtis Haynes Jr., Buffalo State College associate professor of economics and finance, who has taught the topics course ECO 389: Cryptocurrencies, Blockchains, and the Global Economy (and invested in bitcoin himself), recently shared his knowledge about the digital currency and the burgeoning industry.

Haynes joined the faculty in 1993 with a doctorate in economics from the University of Massachusetts, Amherst. His areas of expertise include microeconomics, personal finance, cryptocurrencies, industrial organizations, and the political economy, with a special emphasis on the Black condition in the United States. In 2004, Haynes founded the Conscious Investment Group, a venture capital and financial literacy cooperative, and in 2014, he founded the Mondragon Village Association, a real estate holding and management company that is currently being converted to cooperative ownership. In 2018, along with a leadership team, he established the CIG Leadership Academy in Community Building Economics.

How does it work?

Bitcoin is a decentralized digital currency. The first “genesis block” was mined by Satoshi Nakamoto, a name widely believed to be a pseudonym for a person whose true identity remains unknown. All the bitcoin created since 2009 has been processed by a growing network of increasingly powerful computers that record each and every transaction on a transparent distributive ledger called the blockchain. The method of processing is called mining, and miners earn bitcoin when their computers find correct numerical values.

There is a lot of capital, labor, and resources going into solving these mathematical problems and increased government regulatory interests in the United States and across the planet. Importantly, bitcoin has a fixed supply that will reach its limit of 21 million by 2140.

What makes it attractive?

Bitcoin can be traded 24/7, move around the world faster than the speed of light, and facilitate millions of transactions at the same time. Bitcoin is unique among cryptocurrencies in its fixed supply that is infinitely divisible. Because of its technology, it cannot be manipulated by any authority figure such as a bank, government, or corporate interest.

Globally, there is a huge unbanked population who does not have access to traditional banks. Through crypto, if individuals have a phone and an Internet connection, they can, at a minimal cost, transfer money, make trades, and move or store monetary value. Also, because we’re in what is considered an early adoption period, there is a lot of volatility, a function of speculation, and short-term trading interest. But the field also has a potential for lucrative returns for buy-and-hold value investors as adoption increases.

In the United States, we can look at bitcoin and other forms of crypto as a speculative asset, but for many third-world countries with weak economies, this type of currency could be a game changer. The idea of a decentralized fixed supply asset that has all the characteristics of money yet is not controlled by Western banks and international organizations such as the World Bank and International Monetary Fund (IMF) is receiving a lot of interest and study. Just recently, El Salvador, which has such a weak currency it uses U.S dollars, has now added bitcoin as legal tender. The world is watching.

How big a player is cryptocurrency in the financial arena?

The crypto market is not yet a big player financially. The market currently has a market cap of around $2 trillion, with 50 percent of that being bitcoin. In comparison, gold’s market cap is $10 trillion. There are about 300 million global users. These numbers are miniscule compared with $450 trillion in global financial assets and a world population of 8 billion. However, especially since 2020, there has been a huge increase in institutional adoption. As technology, energy efficiency, and government regulations get hashed out, the upside potential is huge.

While there are no guarantees, the industry has shown significant resiliency. One country’s ban can lead to another country’s opportunity. For example, the bitcoin mining that was banned in China has moved to other countries with a significant amount of mining moving to the United States and Canada.

Can people become rich from it?

Anecdotally, until this latest bear market, which is affecting just about all financial assets, I have heard from more than a few students and alumni who have made tens of thousands to hundreds of thousands of dollars from speculating in cryptocurrencies. Empirically, since its inception, bitcoin, until this last pullback, has outperformed gold and the S&P index, the leading investment benchmark. Over the last decade, there are a lot of newly minted bitcoin and cryptocurrency millionaires and even billionaires.

Many say that they entered the crypto and bitcoin markets because they saw the potential of huge speculative gains. They stayed because they did their research and have found value in the industry. And just like old-school value investors such as Charlie Munger and Warren Buffett, who advised people to find something of value and hold on to it for a lifetime, the bitcoin diehards have found value in bitcoin and the industry and plan to buy and hold.

What is the future of cryptocurrency in light of the recent collapse of market value?

Since its inception, people have asked: Are bitcoin and cryptocurrencies a Ponzi scheme to be avoided, or is there real value being created in these new digital spaces? In spite of the current 70 percent drop in price from its high in November of 2021, data show that bitcoin is experiencing increased adoption, especially in small denominations or fractions of bitcoin called satoshi.

Even as the weak hands leave the market, the fundamentals suggest that bitcoin and other cryptos are being mainstreamed at an increasing rate and still have value as a cutting-edge twenty-first-century technology. These new industries are the darling of the millennials and Gen Zers who have come of age during this digital revolution. The shift to this type of technology is part of a paradigm shift responding to monumental changes in society, including Black Lives Matter, the Me Too movement, and Donald Trump and Bernie Sanders populism.

The actions taking place in this economic space remind me of the 2001 dot.com collapse, when most Internet businesses went under. This is in line with the standard equation of 90 percent of startups fail within the first year, while another 70 percent fail within years two through five. This is new territory, and no one can really fathom the long-term consequences nor be sure of the winners and losers. But the principles of market supply and demand are still relevant.

What is especially unique about bitcoin is that its long-term supply is fixed and verifiable. People should do their homework and learn why this is important and from their research make sound financial decisions according to their own risk tolerances. The global pandemic of 2020 has put us on notice. There is no turning back. Many of the rules of the industrial age and twentieth-century capitalism are being challenged, especially here in the West. As they say, strap in and hold onto your hats. We are in for one heck of a ride.